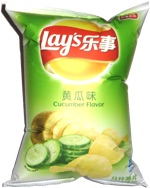 Taste test: Cucumber-flavored potato chips? This version from China looked to be a whole new thing for Lay's!

The potato chips looked mostly like regular Lay's, with a good yellow color, gentle curves and some bubbles embedded inside, but there was also a very light smattering of green seasoning.

We crunched in to find that cucumber-flavored potato chips taste very different than ordinary ones, as cucumber is quite different from salt or any of the various savory flavors generally used. It really did taste like cucumber! It took some getting used to, but after trying a few of them, many snackers kind of liked the taste.

But not everyone! One of our snackers didn't like the taste much at all, but not because of any dislike of cucumbers. He theorized that the green Lay's bag reminded him very much of the Sour Cream & Onion version, which these were nothing like, causing a major disconnect of subconscious expectations.

Smell test: Definitely a cucumber-like smell, maybe some other spices in there too.

This snack was discovered at Reno Asian Supermarket. Review published .