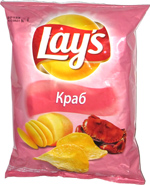 Taste test: This Russian bag of Lay's contained smallish chips with a nice yellow color and without much in the way of seasoning powder that we could see. There were occasional bits of dark skin on the edges of the chips, but not a lot. Despite the bag's travels aboard some airplane flights from Moscow to Texas and then a postal voyage to Massachusetts, the chips were largely unbroken.

We crunched in to find quite a bit of crab flavor — probably some seasonings too, but really, lots of crab. A few years back, Lay's sold a Lay's Crab Spice Seasoning flavor in the USA, but this was not the same at all. The crab spice one was along the lines of the Utz Crab Chip and Herr's Old Bay chips, with a crab seasoning but no actual crab. These seemed to be trying to taste like not the seasoning, but the actual crab. Our snackers had lots of reactions, ranging from slightly positive to very negative. Some thought the taste was like crab, some thought it was like fake crab, and others didn't like them enough to care to make such a distinction. Most people were just slightly negative, as they didn't find the flavor entirely objectionable, but they did find it weird and not particularly good. A sizable minority did find it extremely objectionable, in some cases seeking out other snacks to cover up the taste.

Smell test: Very mid spices. Could not smell any crab.

This snack was discovered by Stephanie Stoll in Moscow. Review published November 2013.