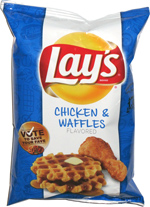 Taste test: This was the most anticipated of the three "Do Us A Flavor" varieties from Lays (the other two were Sriracha and Cheesy Garlic Bread) and unfortunately they disappointed by not tasting much like chicken or waffles, let alone chicken and waffles.

The chips didn't appear to have much special seasoning, with just a few bits of black. I crunched in to find a soft crunch and good crispness. There was a hint of sweetness in the first bite, but really nothing that seemed to be like waffles or syrup. We've reviewed a number of chips that were supposed to taste like chicken, many of which really did. These did not, or if they did at all, the resemblance to chicken was really, really remote. I noticed in the aftertaste a hint of black pepper. That's not something that I would tend to associate with chicken & waffles, though I suppose it could be among the spices in the fried chicken's breading. If black pepper was the closest connection that these had to chicken, that's not good. The mix of seasonings wasn't a bad taste at all, but just not anything close to chicken & waffles.

Smell test: Weird. There's kind of a hint of maple syrup in there, and maybe some fried food or even chicken-like sort of smell, but if I had taken my first whiff without knowing it was supposed to be chicken & waffles, I don't think I would have had any idea what it was.

This snack was discovered by Jeremy at CVS Health. Review published .