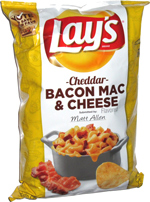 Taste test: This entry in the Lay's Do Us A Flavor contest was much anticipated, as mac & cheese is a favorite comfort food for many, and everything's better with bacon! (Competing flavors in the contest are Cappuccino, Wasabi Ginger and Mango Salsa.) The chips had somewhat wiggly shapes and were light yellow with an orange glow in many areas, plus some smallish black specks scattered unevenly over the surfaces. We crunched in to find a tasty but mild cheddar taste that wasn't all that different from a lot of other cheese-flavored potato chips. There was a hint of something bacon-like, on the weak side, strong enough to alter how the cheese tasted but not nearly strong enough to really taste like someone put bacon in my mac & cheese. It was a good taste, fairly mild, but not a real close match for the highly craved flavor in the name.

Smell test: Mild cheddar smell, with maybe a hint of smoke but not really bacon.

From the package: “Submitted by: Matt Allen” ... “I am a firefighter and we love to cook Bacon Mac & Cheese. Nothing goes better with it than Lays [sic] potato chips! #dousaflavor #baconmaclays”