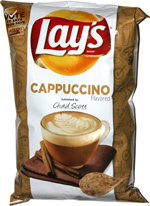 Taste test: In each of the Lay's flavor promotions, there's at least one flavor that has some snackers saying "Ick!" even before they get to taste it. In the last round, it was Chicken & Waffles. For Walkers (the British version of Lay's) it was Cajun Squirrel. Cappuccino wins the prize this time as it competes against Wasabi Ginger, Cheddar Bacon Mac & Cheese and Mango Salsa to become a permanent flavor.

This review is from the point of view of a serious snacker (indeed, a Chief Snacks Officer) who likes the smell of coffee and the taste of coffee ice cream, but doesn't drink coffee — ever. The chips had somewhat wiggly shapes and a pale yellow color on the unseasoned portions, with an uneven light brown seasoning. It looked similar to a light coating of cinnamon. I crunched in to find a mild coffee taste on the first bite, but they made sure to sweeten it too, as there was definitely some sugar, but not a whole lot or too much. The coffee taste was not strong, but the mix of coffee with potato, milk and sugar was pretty good. I'd be the first to declare "ick" when taking a rare sip of coffee (by accident) but I didn't dislike these at all. It was a nice taste. Not as good a nice coffee ice cream, but nothing at all objectionable. For me, anyway.

So I offered chips to a whole bunch of coffee addicts, and opinions were all over the map. Some said the flavor was just like a cappuccino, but there quite a few declarations that the taste was just incredibly terrible.

If you like coffee, don't declare "Ick!" until you actually taste one of these chips — it could be worth a try! (Or not.)

From the package: “Submitted by Chad Scott, Henderson, NV” ... “Cappuccinos are my lifeblood. A cappuccino potato chip lightly dusted with sugar ... I may never put then down”