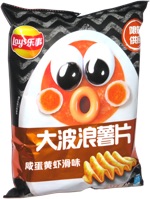 Taste test: These potato chips from China had wide, angular ripples and a light yellow color, with any seasoning powder being light enough that it was hard to see against the surfaces. Shrimp and egg sounded like an odd combination, though I did used to like IKEA's open-faced Shrimp & Egg sandwich, before they discontinued it.

I crunched in to find a good crisp crunch, and the taste was way more shrimp than egg. I'm figuring that there was indeed egg in there, but the shrimp flavor was so dominant in comparison that I couldn't really notice it. Far from my favorite chips ever, but not bad.