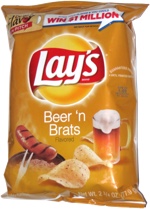 Taste test: Most years recently, Lay's has done a "Do Us A Flavor" promotion in which chip fans submit flavor ideas, then Lay's picks some, formulates flavors to match and sells them for a limited time, and finally chip fans get to vote on which one to keep as a permanent flavor. They seem to be doing things a bit differently this year. Despite the appearance of the words "Do Us A Flavor" on the bag, this apparently is not one of those flavors, but rather just a teaser flavor to entice people to submit ideas.

As for the Beer 'n Brats potato chips in the bag, they had various shades of light yellow and light orange, with curvy shapes that had some bubbles embedded inside, plus a fairly sparse amount of small seasoning bits in various dark colors. I crunched in to find a nice savory seasoning that did not scream "bratwurst" to me and didn't even whisper "beer." If it hadn't had those words on the bag, I don't think I could have possibly guessed either of them as the intended flavor. But they were good chips.