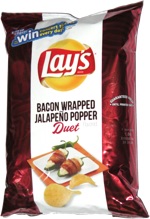 Taste test: This flavor had some strange origins. It showed up a week after three other musically themed Lay's flavors (Flamin' Hot Dill Pickle Remix, Classic Beer Cheese and Electric Lime & Sea Salt) and had the same music-related promotional material on the bag — but it wasn't marketed along with the other three. Plus, it wasn't even a new flavor, as Wavy Bacon Wrapped Jalapeño Popper (without the word Duet, and with ripples, but with the identical illustration on the bag) was part of last year's Tastes of America promotion.

Even more strangely, I found it alongside bags of the Wavy version, which I hadn't seen since last year's promotion. Releasing the same flavor simultaneously in rippled and unrippled is just not the Lay's way.

I opened the bag to find that the chips had a strong yellow color and generally flat shapes, with a good smattering of fairly large green seasoning bits on the surfaces. I crunched in to find a light, crisp crunch, with a flavor that surprised me completely. It was initially just sort of buttery, with no hint of smokiness or heat. It changed a little — but not to the point of legitimizing the stated flavor — in the aftertaste, with some slight smokiness and a bit of heat, though really not a whole lot of either. So it missed the flavor mark by even farther than the Wavy version did.

From the package: “turn up the flavor™” ... “Experience flavor and music in perfect harmony.”