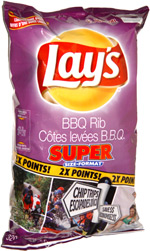 Taste test: These potato chips were fairly wiggly, with some folded-over chips, and they had an orange glow to them, with some bits of seasoning visible on the surfaces.

I crunched in to find that the chips were thin cut and very crisp, and best of all, loaded with a very tasty barbecue seasoning. Having recently had another Canadian chip boating a similar flavor, President's Choice Barbecue Baby Back Ribs, a comparison of the flavors seems in order. These were quite good, and I have no complaints about the taste or texture. Either chip would make an excellent choice, but those President's Choice chips were even better than these.