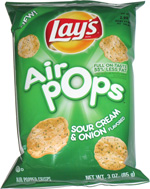 Taste test: These crisps were Lay's attempt to take on Popchips, based on not just their similar appearance, but even their name. (Read more about the Air Pops line.) The round crisps had very light beige color and lots of green things on the surfaces. The shapes varied, with most of the pieces a bit wiggly or slightly cup-shaped, curling up around the edges, while a minority of pieces were almost completely flat. I crunched in to find that the thickness and texture also varied a lot from one piece to the next. The flat pieces were thinner and less crisp than the other ones, but even the better ones lacked the great combination of lightness, crispness and crunch that makes Popchips so appealing. Most were thinner and denser than Popchips, and the crunch was far less crisp and generally softer, resulting a noticeably weaker overall experience.

To evaluate the sour cream and onion flavor, a comparison to Lay's Sour Cream & Onion Potato Chips is in order, and indeed the marketing copy on the bag begs us to make just such a comparison. Those potato chips taste quite good; these were pretty bland (and also less flavorful than the sour cream & onion Popchips). They certainly didn't have the same taste. Nothing horribly bad about the flavor, and there seemed to be a lot of flavor powder on the surfaces, but the bag's claim that these have "all the crunch and taste you've come to expect from us" does not ring true. The potato chips had a great fresh sour cream and onion taste that mixed well with the potato; these had weaker versions of all three flavors, resulting in nothing special.

A decent snack, certainly not terrible or anything, but not nearly as good as the corresponding flavor of Popchips.

Smell test: KInd of heavy on the sour cream. Maybe a little onion too.

From the package: “Full on taste 55% less fat” ... “We started with all the mouthwatering goodness Lay's® brand flavor and air popped it into these amazingly light tasting crisps. Our Lay's® Air Pops™ crisps have all the crunch and taste you've come to expect from us, with 100% taste and a whopping 55% less fat than regular potato chips.”