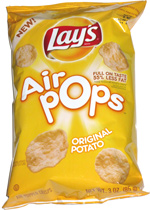 Taste test: This new line of "Air Pops" from Lay's looked to be their way of directly taking on Popchips.

They rolled out this flavor along with Barbecue and Sour Cream & Onion versions, and the trio conveniently corresponds to both Popchips flavors and Lay's Potato Chips flavors. These were a much paler shade of beige than the original flavor of Popchips, with none of the subtle browning that Popchips have. When we crunched in, we found that color wasn't the only difference. They had a softer, less crisp crunch and were thinner and less flavorful than Popchips, with a subtle potato flavor, rather than the salty fried potato flavor that Popchips have. Most of our tasters thought they were OK, but when asked to pick between these and Popchips, nearly everyone picked Popchips.

Smell test: Not much, but they actually smelled vaguely of a sweet pastry, not a potato crisp.

From the package: “Full on taste 55% less fat” ... “We started with all the mouthwatering goodness Lay's® brand flavor and air popped it into these amazingly light-tasting crisps. Our Lay's® Air Pops™ crisps have all the crunch and taste you've come to expect from us, with 100% taste and a whopping 55% less fat than regular potato chips.”