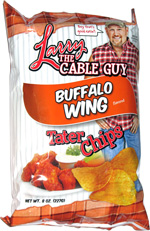 Taste test: These were very flavorful potato chips, with an initial taste that was a lot like Buffalo wing sauce, with just a bit of heat, followed by a nice kick of heat that grew stronger as we ate more chips.

Our snackers were big fans. People praised the taste as they enjoyed eating handful after handful. There was lots of orange seasoning on the surfaces, more than your typical seasoned potato chips, so that left a lot of orange stuff on the fingertips. We'd recommend having some napkins handy, or if you're willing to lick your fingers, you could enjoy more of the great flavor by doing that.

Smell test: Smells kind of like hot sauce, but not actually hot.

From the package: “Wimpy flavors are for sissies. These flavors will knock yer snack cravins like a cop kickin' down a trailer door. Shoot, they are zoo good I'd save yourself the trouble and grab a second, third or fourth bag right now!!! I picked out these here flavors just for you! Now what in the world are you waiting for? Git-R-Done!”

This snack was contributed to Taquitos.net by the manufacturer. Review published June 2012.