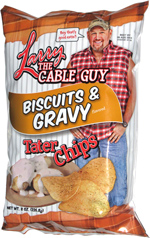 Taste test: This flavor of potato chips immediately got our attention, as we've eaten many, many potato chips but never a "biscuits & gravy" flavor. (The closest was fries & gravy.) As such, we had no idea what the chips would be like, though we were optimistic, because who doesn't like a good biscuit?

We opened the bag to find that he chips had a light yellow color with some areas of browning, plus lots of dark black seasoning bits that looked like ground black pepper in all sorts of sizes and shapes, distributed fairly evenly over the surfaces.

We crunched in to find a good crispness and light crunch. Gravy? Yes, it did taste kind of like gravy. If we hadn't known it was supposed to be gravy and biscuits, we might never have guessed it, but that could be because the flavor is so obscure to the world of potato chips. Yet with gravy in mind, it really was a good match. There was a hint of black pepper, plus a kick of pepper in the back of the throat in the aftertaste. We shared these chips with a large group of snackers, and people thought the taste really was just like gravy and biscuits; many smiles were generated as a result. Really tasty, great chips! (As are many of Larry's other flavors.)

From the package: “Wimpy flavors are for sissies. These flavors will knock yer snack cravins like a cop kickin' down a trailer door. Shoot, they are zoo good I'd save yourself the trouble and grab a second, third or fourth bag right now!!! I picked out these here flavors just for you! Now what in the world are you waiting for? Git-R-Done!” ... “Ingredients: Potatoes, Corn Oil and/or Sunflower Oil, Buttermilk, Corn Syrup Solids, Salt, Cream, Nonfat Milk, Sugar, Spices, Natural Flavors, Yeast Extract.”