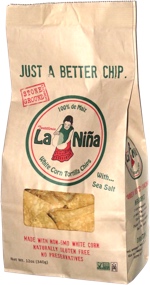 Taste test: These tortilla chips came in wedge-shaped pieces, with generally flat surfaces that were smoother and more consistently light in color than most tortilla chips.

We crunched in to find a fairly solid crunch, quite a bit harder than your average tortilla chip, but still short of being too hard of a crunch. The chips had a nice fresh corn taste, but a fairly mild one. The salt level was on the low end, but there was enough to help bring out that bit of corn flavor.

We shared these with lots of snackers who were enjoying some beer — and we didn't have any salsa on hand to try dipping them in — but quite a few people went out of their way to praise the crunch or taste.

From the package: “With... Sea Salt” ... “Stone Ground Corn” ... “Just a better chip.” ... “Made with non-GMO white corn” ... “naturally gluten-free” ... “no preservatives” ... “After years of enjoying fresh corn tortillas shipped by my mother-in-law from my wife's hometown in Mexico, I decided it was time to share real corn tortillas with the rest of New England.”