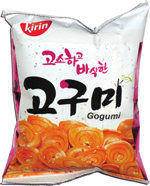 Taste test: The snacks in this bag were sort of bowl-shaped, with shiny surfaces that included an irregular thin spiral stripe. Each piece measured a bit over an inch across. The surfaces had a shiny glaze, and most pieces had some sesame seeds attached. The actual colors were a bit of a mismatch to the picture on the bag, as the overall surface was light brown, not orange, and the stripes were darker brown, not purple.

We crunched in to find a very nice taste. The main ingredient was wheat, but the ingredients revealed lots of other stuff in there too, including coconut and peanut, and somehow the combination really worked well. The shiny glaze added some sugar sweetness too. This was one of those snacks where we had no idea what to expect until we tried it, but these quickly gained many fans among our snacking panel.