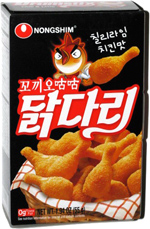 Taste test: This box contained a pink foil bag with cartoon characters of a chicken, a hunter and a chef.

The hunter and the chef appeared to be dancing with each other; we're not sure why, but maybe because they got their chicken? The hunter and chicken were also depicted on the box, in slightly different poses. The chicken looked sort of like something out of Angry Birds. As for the snacks inside, they were smallish pieces, each a bit over an inch long, with the shape of chicken drumsticks. The outside had a fried chicken breading sort of color, and the inside was hollow. The shell was thin and crispy, with a light crunch. There was a good amount of flavor, sort of like chicken breading, but not much in the way of chili or lime (at least at first). Some additional spices — more chili than lime — did kick in for the aftertaste, which grew gradually hotter as we ate more. There was at most a hint of lime. One of the more unusual snacks we've found, but a nice texture and quite tasty. The small bits of breading material tended to stay on the fingertips, so either a napkin or frequent hand washing would be recommended to avoid making a mess.

Smell test: Sort of a fried wheat smell, but nothing much in the way of chili or lime.