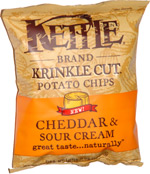 Taste test: These wide-rippled potato chips were cut thick and had a golden yellow color, with most of the chips being fairly small, most having some skin visible, and a few chips folded over.

They were very, very crunchy and had a lot of potato taste, mixed in nice hits of sour cream and cheddar cheese. Our tasters were mixed over the flavor. Some liked it, but one said that the sour cream didn't taste right. Another said the flavoring tasted greasy, like something you would eat at a carnival.

From the package: “These Cheddar & Sour Cream Krinkle Cut™ chips have big flavor, bold crunch and absolutely nothing artificial. They taste so great because they're made from only the most natural, real food ingredients, finest potatoes, best oils and craft cooking methods.”