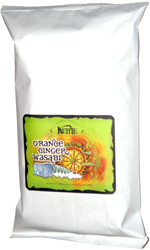 Taste test: If I had to pick three flavors to combine on one potato chip, orange, ginger and wasabi are not the first three that would come to mind.

When I opened this bag, the chips looked like typical Kettle Chips, with very little seasoning visible on them. Expectations were low, but when our tasters bit in, the reactions were extremely enthusiastic. There was a strong, tangy orange and ginger flavor to start with, with a little wasabi kick at first, quite tasty and flavorful. The wasabi grew stronger as time went on and added a real kick to an already intense flavor. Quite nice. The wasabi level seemed to vary from one chip to the next, as some pieces didn't have much kick. These are a part of the Kettle Chips "Fire & Spice" People's Choice promotion for 2007, in which Kettle sells five limited-time flavors and lets snackers vote on which one should become permanent. One major change for this year's People's Choice is that the chips are not rippled as they were in the 2006 promotion, but the flavor on this one worked just fine on a non-rippled chip.

Smell test: Nice mild smell with a little cirtus noticeable, and even a hint of ginger.

From the package: “A Natural Obsession”

This snack was contributed to Taquitos.net by the manufacturer. Review published November 2007.