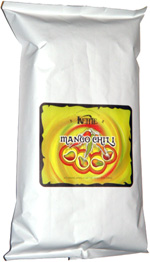 Taste test: These chips, part of the Kettle Chips Fire & Spice People's Choice promotion for 2007, were a big hit around the chip bowl.

The bag, which was unfortunately just over half full when we opened it, quickly became empty once our tasters crunched in. The taste was tangy and sweet at first, with a great mix of spices for a really good taste with a hint of heat. The chili kicked in some more in the aftertaste for a moderate heat that didn't overwhelm the taste but did enhance it. Among the five flavors for this year, it's a close decision between this and the Orange Ginger Wasabi ones for the best. Both are unconventional flavors that were extremely delicious, but the Orange Ginger Wasabi has a slight edge over Mango Chili for an even better taste.