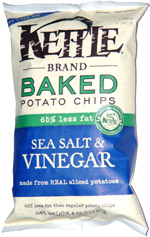 Taste test: After being very disappointed by the Lightly Salted version of Kettle's new line of low fat potato potato chips, I wasn't optimistic about this salt and vinegar version being good. When I opened the bag, they looked like potato chips, with skin around the edges and a somewhat wiggly shape, though far less wiggly than regular (non-baked) Kettle Chips. There was some color variation within each chip, with some browning of the generally yellow chips, but not as much color variation as the non-baked ones.

I crunched in to find a fairly bland vinegar taste, sort of chemical-like, to go along with an incredibly bland texture. There's a special something about potato chips that makes everyone want to eat them, and it would be seem that by baking these and taking out all of that fat, they've managed to remove that special something. The taste was bland, and the texture was even blander, like a really boring cracker. Vinegar mixes really well with a good potato flavor, but they've taken away the real potato flavor, leaving these with just an odd vinegar taste. There was nothing really offensive about the flavor or texture, but there was absolutely nothing appealing either. Even something fairly lame like Baked Lay's (which, unlike these, isn't really a potato chip) is far, far superior to the Kettle Baked Potato Chips.

Smell test: Seemed like a mild vinegar smell at first, but then it was like punching me in my sinuses.