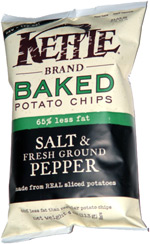 Taste test: These potato chips were smallish and nearly round, with skin around nearly the entire edge of most chips, plus just a handful of fairly large pieces of black pepper on each chip.

The pepper flavor was fairly minimal on many of the chis, though the ones with more pepper bits visible did taste more peppery. These were far better than the ultra-bland Lightly Salted and Vinegar versions of Kettle Baked Potato Chips and also better than the runner-up Barbecue version as somehow the bland texture that did in those chips didn't really offend me or even seem particularly bland when combined with a bit of pepper. Pretty good.