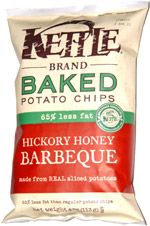 Taste test: These potato chips were very crunchy when I bit in, and on first bite I was briefly convinced that they were quite a bit better than the other varieties of Kettle Baked Potato Chips (which were all really bland and not potato chip-like).

After the first bite, I still thought that these were better than the other flavors, but I would not go so far as to say that these were good. They still had a really flat texture that was just unappealing. It was kind of like the stiff texture of yucca chips, only even stiffer in this case, but still very crunchy, though not in an appealing way. The barbecue seasoning was fairly tasty, and it did help to make the first bite tolerable. Some of our tasters liked these enough to keep coming back to the bag for more, but the chips still had a fundamental texture problem. When comparing these baked chips with normal potato chips, there is no comparison, as the the results of the baking process clearly were inferior to the frying process.