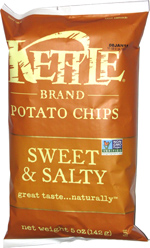 Taste test: We've reviewed quite a few flavors of Kettle Foods' potato chips, as well as many other brands, and mixing sweet and salty in a potato chip is relatively rare. (Many barbecue chips and some other flavors do include sugar among the ingredients, so it's far from unheard of, but just salt and sugar without any real spices is quite unusual.)

We opened the bag to find that the chips had a light yellow color, with many wiggles, some bubbles embedded inside, and areas of skin around the edges. We crunched in to find a light crunch and middling crispness, with a taste that was mostly like potato chips, except just slightly sweeter. They didn't load on the sugary heavily here. The slight sugar addition was most noticeable on the first bite, and gradually diminished after that.

The mix of tastes wasn't bad, but it did seem a bit unnecessary to add the sugar. A nice salty potato chip is just fine on its own. This one tasted about 80% salty and 20% sweet (which is a bit odd, because the three sugars in the ingredients were all listed before the two salts). It wasn't anything that really stood out as particularly tasty, special or innovative; it was just a good potato chip with some sugar. Still, when we shared these with a panel of snackers, people liked them a lot.

Without checking with us, someone took the rest of the bag and mixed it into a bowl of normal (non-sugary) rippled potato chips. The result was interesting, as when we tried these together with the normal chips, the sugar was more noticeable, thanks to the contrasting taste.

Smell test: Strong potato smell, a bit oily, reminds me more of other brands of potato chips than Kettle Chips (which usually have a richer nicer potato smell).

This snack was discovered by Jeremy at Gristedes at 103rd & Broadway. Review published November 2014.