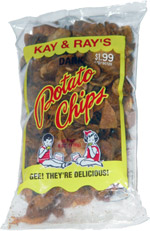 Taste test: These potato chips were on the small side, though most of the chips were unbroken, and they were indeed dark in color.

When I first bit in, I was impressed by the great crispness and dry feel, and the taste was pretty good, similar to other dark russet potato chips. Shortly after that, my impression was less positive, as there was an unappetizing, sort of icky aftertaste. These chips are cooked in lard, and I think that was the culprit in giving them that taste. Some of our tasters noticed the aftertaste, but others didn't. If you don't like the aftertaste, I'd get the Cape Cod dark russet chips and avoid these.

From the package: “Gee! They're delicious!” ... “Are these chips burnt? No! Some people think Kay & Ray's Dark Potato Chips are just regular potato chips that were cooked too long. Please allow us to clear up that misconception. 'You've seen one, you've seem 'em all'? That does not apply to real potatoes. There are many varieties of potatoes and although they look similar, they different in the molecular level, which makes them look differently when fried. Some turn very white, while others turn brown, depending on the type of stored energy that is found naturally in the potato.”