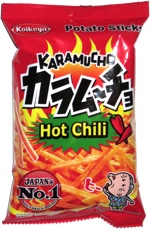 Taste test: This small bag contained golden yellow potato sticks in various lengths, but generally fairly long, without much seasoning visible, and with potato skin at the ends of some sticks. They appeared to be the potato sticks version of the Karamucho potato chips.

I poured a bunch of sticks into a bowl and ate some off a spoon. I crunched in to find a fairly solid, crisp crunch, with tangy taste at first that was stronger than the potato taste, but not entirely overwhelming. Soon after that, the heat really kicked in, a middling burn that was quite tasty. Very good!