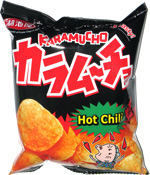 Taste test: These potato chips had a major orange glow to them, though when I examined the chips closely, it was hard to see any actual orange seasoning powder.

Upon biting in, I was impressed by the depth of the favor, which was spicy, sweet and intense, with quite a hot aftertaste. Definitely a different taste any any other hot chips or chili pepper chips we've tried. The texture was also quite nice, as the chips were quite crisp but had a very brittle crunch. It was hard to stop eating them, but it was also hard not to want a beverage right after. Would also work as a nice complement to a sandwich. Great!

Smell test: Sort of like a barbecue chips smell, but tangier, but in a weird way.

From the package: “Koikeya The Pioneer of Potato Chips in Japan” ... ” 'Karamucho is a Spicy & Tasty potato chips with chili powder and other various spices.” ... “Made in Taiwan” ... ” 'Ultimate Spicy Potato Chips' from Japan” ... “Karamucho was born in Japan in 1984. After many years of development and study, Karamucho is favored by many people nowadays, as the 'Original Spicy potato chips'. Karamucho is the No. 1 popular selling brand in the spicy snack category in Japan.”