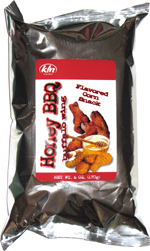 Taste test: This bag contained smallish snacks shaped kind of like drumsticks/chicken wings. We crunched in to find a crisp, fairly dense crunch, with a mild corn taste and a tangy flavor that grew spicy in the aftertaste. If I had to guess the taste, honey BBQ Buffalo wing would not have readily come to mind, but thinking about it, that didn't seem like too far of a stretch.

We have reviewed some similar snacks that were hollow, but it was hard to tell whether these were hollow or not, because many pieces were sort of flattened, bringing the outside edges together. Some of the thicker pieces had enough of an interior to be somewhat hollow.

We shared these with several snackers after they ran a short road race, and everyone who tried them praised the texture and taste, in many cases returned to the bag for seconds and thirds.