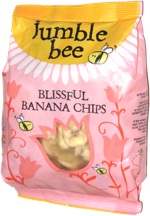 Taste test: This smallish bag contained lots and lots of banana chips, cut an an angle to give them shapes that were more oval than round. They were generally cut fairly thick.

I was surprised to see the words "Contains: Coconut" on the bag because, well, they're banana chips! But when I bit in, I didn't notice much if any coconut flavor. I'm generally not a big fan of banana chips (I would rather just eat a banana) and these were no standout. As with most banana chips, they added sugar, but again I would just rather enjoy the sweetness of the real banana, which does not require added sugar and tastes better than and banana chip with added sugar.

This snack was discovered at TJ Maxx. Review published October 2017.