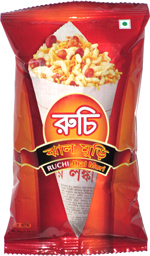 The sticks were tiny, the puffed rice very small, and even the peanuts were small as peanuts go. The impressive thing when trying any of them was just how hot they were. There was quite an impressive kick of heat and spices for such a tiny snack. The heat did seem to vary in intensity from any given piece to the next, but overall there was quite a lot of it, even from just one tiny piece in some cases. The mix of tastes and textures was nice. If you're looking for a small snack with a some serious heat, this would be a great choice. The bag was fairly small, but you could make a lot of servings out of it.

This snack was discovered by Jeremy at Foodland, North Cambridge, Massachusetts. Review published .