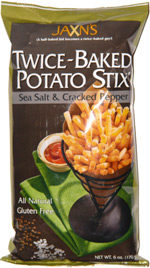 Taste test: These fries were quite a bit different than the many other kinds of fries we've eaten, in both taste, texture and appearance.

They looked almost like bread sticks, with a smooth, round exterior and a color variation sort of like how the outside of a loaf of bread varies in color. They were very crunchy, but not in a crisp way, a much different feel than fries have. As for taste, they didn't taste salty or peppery, and they didn't really taste much like fries either. It was more of a bready potato flavor. Most of the better snack fries are made from corn, whereas these were primarily potato, so you would think that the use of potato would make these more fry-like, but it didn't. Not one that I would buy again.

From the package: “A half-baked kid becomes a twice-baked guy!” .... “Jaxn is a bona fide French fry expert. The potato was his favorite vegetable and he never met a fry he didn't love ... and then eat. The road to Jaxn's middle school years was paved with French fries. But then, all those fries Jaxn was eating started eating at him. He didn't like being heavy. Not in middle school with girls and basketball and girls. That's when his Nana, Geraldine, the master baker of the family, decided to come up with a solution for the grandson she loved.”