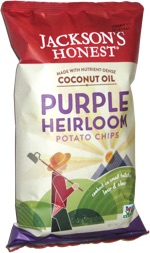 Taste test: This wasn't the first bag of purple potato chips we've eaten, but it was first to openly admit it. The others — Terra's Blues, Crême Fraîche & Dill Blues and Jalapeno Chili Blue Crinkles, plus one from Seneca — were all marketed under the color blue, despite a purple appearance that was virtually the same as these.

We crunched in to find a fairly light crunch with excellent crispness, really a top-notch texture. As for the taste, the folks at Jackson's Honest made some serious use of salt to help bring out the potato flavor. Usually we're the ones to complain that potato chips don't have enough salt (often while reviewing low-salt potato chips), but in this case, they really packed on the salt, just about to excess. The potato flavor was quite good, but there was so much salt on many of the chips that it went beyond just bringing out the flavor of the potato, overshadowing it instead.

Smell test: Pretty mild. Not much.

From the package: “Made with the nutrient-dense coconut oil” ... “cooked in small batches low & slow” ... “ingredients with purpose from a family on a mission” ... “This purple heirloom potato contains the same plant-based antioxidant compounds that give blueberries and pomegranates their vibrant coloring.” ... “Grown 7,000 years ago in the Andes Mountains, purple potatoes were once reserved for Inca kings. Coconut oil is the perfect partner of this potato, giving it an unrivaled depth and richness.” ... “Product of Colorado, USA”

This snack was discovered by Jeremy at Wegmans. Review published June 2017.