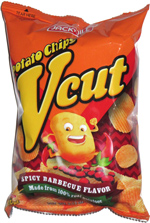 Taste test: These potato chips had surface colors ranging from yellow to a slight orange, with very narrow ripples and some bits of skin around the edges. There was some coarse orange seasoning powder in the ridges, but not much of it.

We crunched in to find a hot and tasty barbecue seasoning, a bit hotter than expected (though we maybe should have expected it, given the "spicy barbecue" label). The hot peppers were the most noticeable flavor, as the other spices were fairly ordinary, but the mix of hot, spices and potato worked well. We especially liked the mascot on the bag, who appears to be a potato with a face, arms, legs and hot pepper feet, running away from we-don't-know-what.

From the package: “Made from 100% real potatoes”