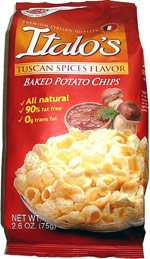 Taste test: These backed potato crisps were light and airy and had a distinct scoop-like shape.

Many of our tasters insisted they tasted like Chipsters, a discontinued Nabisco snack from the '80s and early '90s. Apparently Italo's makes a similar snack, and they're now being imported back to the U.S. through stores like Whole Foods. The "plain" version will remind you more of Chipsters than this variety will, as they've added a "Tuscan spices" flavor. Having never been to Tuscany, it's hard to place what is meant by "Tuscan spices" but there's a photo of mushrooms on the front of the bag, so we assumed that was one of the flavors. Paprika was also listed as an ingredient, so that could be one of the spices as well. I'm not a big fan of mushrooms to begin with, so the taste wasn't particularly pleasing. The regular version of this snack was much better, and it should please snackers who were fans of Chipsters back in the day.

Smell test: Not a strong flavor smell, but a distinct aroma that's hard to place.

From the package: “Italo's represents an evolution for the company Bag Snacks. It combines the pleasure of a crispy and tasty potato chip adn the lightness of oven cooking (without frying).”