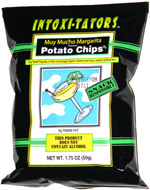 Taste test: These booze-themed potato chips were generally smallish, with a good crispness.

The flavor promised on the bag was an ambitious one. If we ate a few chips and thought about it, it did taste reasonably close to a margarita, but the flavor was much more mild than the corresponding beverage. Most of our tasters though these were OK, though none were hugely excited about the taste, but a few thought that the taste was just awful. One of those said it tasted like a margarita, but a bad one.

Smell test: Not much, just a slight sugary smell.

From the package: “Top Shelf Tequila, a Hint of Orange Liquor, Sweet and Sour, with a Salted Rim” ... “Snack Responsibly” ... “This product does not contain alcohol” ... “There was a lucky Irish gal named Heady who liked to do a jig while she cooked dinner. One fateful night she jigged just a little too much and spilled her wine in the mashed potatoes. Being practical and not wanted to waste a potato or any wine, she served them anyway. What a Happy and tasty Accident it Was!”