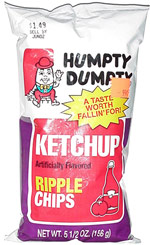 Taste test: These have a stronger ketchup flavor than some Ketchup chips, and I thought they were pretty good.

Another opinion: Humpty Dumpty chips tried too hard to emulate the ketchup flavor, and hence there's too much flavor powder on these chips. The more subtle Wachusett ketchup chips taste better and remind you more of dipping a regular chip in ketchup.

From the package: “Thank you for buying Humpty Dumpty!!! We very much appreciate your patronage.” ... “Some things just go naturally together. What could be more natural than making potato chips in the potato producing state of Maine. Humpty Dumpty has been making potato chips for over 50 years. We are the only potato chip manufacturer in the state and one of the few remaining regional snack food suppliers.” ... “A taste worth falling for!”

This snack was discovered by Jeremy in New Hampshire.