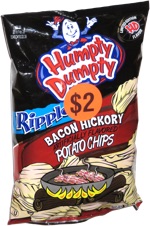 Taste test: These potato chips had wide ripples and gently curving shapes, with a bright orange glow overall, plus some bits of dark orange seasoning scattered throughout.

We crunched in to find that the chips delivered every bit as much flavor as the bag promised, with a crunch that varied from soft to somewhat solid depending on the chip. They didn't hold back on the seasoning, which had lots of hickory and a bit of a BBQ taste, but not really much bacon smokiness, a flavor that was quite tasty and worked well with the potato.

Smell test: Strong hickory smell, made it hard to notice the bacon.

From the package: “At Humpty Dumpty, we make flavor an explosive experience by using only the highest quality potatoes and the most intensely flavored seasonings for the best-tasting chip around.”