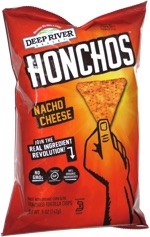 Taste test: These chips looked a lot like Doritos Nacho Cheese but claimed to be made with more natural ingredients. They had the same triangular cut, with generally flatter shapes and more uniform orange color. There appeared to be a lot of powder caked onto the surfaces.

I crunched in to find a good crunch, but a less crisp one than we generally get from Doritos. There was a weaker cheese taste at first, but a stronger one as time went on, as the cheese built in intensity and added a mild heat. The taste was different from Doritos, but it was closer to Doritos than the smell was (see "Aroma"). Despite the chips being in good condition and largely unbroken, the bag was only filled about halfway.

Smell test: Oooh, way different than Doritos. Not really bag, but weird, as it wasn't like tortilla chips or cheese.

From the package: “Join the real ingredient revolution!™” ... “We're Honchos. Leading the charge in demanding bold flavor, and telling nonsense ingredients to take a hike. No GMOs, no gluten, nothing fake. For real. Organic whole grain tortillas and real habanero peppers team up with the taste of sweet peaches for extreme peach habanero flavor. Be a honcho.” ... “We give a chip™”

This snack was discovered by Jeremy at Cost Plus World Market. Review published .