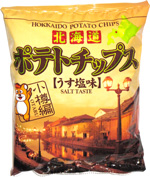 Taste test: These were just regular potato chips, cut fairly thin, with minimal salt on them.

They had a pretty good crispness, but there wasn't a whole lot of potato taste, as a little more salt might have helped. Most of out tasters thought that these were OK, but we definitely didn't have anybody raving about them. Some people compared them to the plain Lay's, but the potato flavor in these was probably weaker.

From the package: “Otaru”

Trivia: I found this bag at the little store at the train station near Mt. Takao.

This snack was discovered by Jeremy in Tokyo. Review published February 2012.