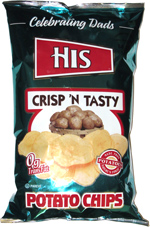 Taste test: These "His" potato chips were described on the bag as being the same as Herr's regular potato chips, except in a special edition bag for Father's Day, and based on our experience with Herr's, that would be a good thing.

We opened the bag to find that the chips had a light yellow color with some areas of minor browning, plus an occasional bit of lightly colored skin on the edges.

We crunched in to find that the chips were cut fairly thin and had a good crispness, with a particularly soft crunch. There was enough salt to bring out lots and lots of fresh potato flavor. Nothing fancy here, but as plain potato chips go, these were very good ones.

From the package: “Celebrating Dads” ... “Make Herr's® HIS ... The bag you're holding contains the same quality Herr's® potato chips you and your family have loved for generations. But it also contains something more: A commitment to strengthening families across America by supporting the institution of fatherhood. Every Father's Day, Herr's® donates the the National Fatherhood Initiative®, an organization dedicated to ''Improving the well-being of children by increasing the proportion of children growing up with involved, responsible and committed fathers.”