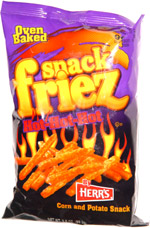 Taste test: These appeared to be the Herr's version of Andy Capp's Hot Fries, and one look inside the bag revealed similar-looking fries with the level of bright-orange seasoning varying from one fry to the next. The fries appeared to be a bit rounder in profile than the squarish Andy Capp's fries, as it looked like these may have been cut square but got rounded out during the cooking process.

I crunched in to find a much different texture than Andy Capp's. They probably had about the same density, but these were crisper and much crunchier, with a much different feel. Andy Capp's really stick to your teeth for a long time, but these didn't stick at all. These was some heat, mixed with cheese flavor, but I would hardly describe the flavor as "Hot-Hot-Hot" as it said on the bag. When I ate about 10 of them in a row, I got a medium heat, and it was good and even lingered for a while after I had a beverage. So the taste and eating experience were good, but the heat was just tamer than I expected.

From the package: “Oven Baked” ... “Corn and Potato Snack” ... “The crispy goodness of fresh-cut French fries and the kick of smoking hot chili pepper; it's a combination that comes together in fiery perfection. Our oven-baked Hot-Hot-Hot Snack Friez combine those irresistibly combustible flavors together with a satisfying taste and crunch.”