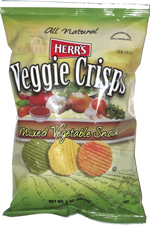 Taste test: These potato-based veggie crisps were rippled, and they appeared to have started out round, but they ended up sufficiently curled that most of them had scoop-like shapes.

They came in the same standard three colors as other variously shaped veggie crisps, with pale yellow, pale green and very pale red; both the green and red ones were much paler in reality than the ones pictured on the bag. The colors corresponded to different flavors, though all three kinds were primarily made from potato, with extra seasonings on the red (tomato) and green (spinach) ones. The yellow ones tasted the best, but the other weren't bad either. The yellow ones also seemed to be crispier than the other ones, with a better crunch. Overall, pretty much the same as other kinds of tricolored veggie crisps, and pretty good.

Smell test: Mostly like potatoes (similar smell to Pringles) but I could smell the spinach and tomato too.

From the package: “All Natural” ... “Mixed Vegetable Snack”

This snack was discovered by Robyn B in Connecticut. Review published July 2012.