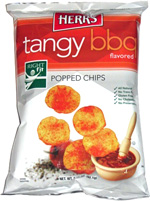 Taste test: These "Popped Chips" from Herr's appear to be their answer to Popchips, the round crisps from Sonora Mills that have proven very popular with snackers. This kind was made from a mix of potato and rice, and they seemed to be about the same diameter as Popchips.

I crunched in to find that they were somewhat thinner and denser. They had a good crunch but were a little less crisp than Popchips. They were quite tasty, as the barbecue seasoning was sweet and tangy (more intense than the barbecue seasoning on Popchips) and mixed well with underlying the potato/rice crisps. They were pretty good, and our tasters gave many thumbs-ups, but the lower level of crispness put them a notch below Popchips.

This snack was contributed to Taquitos.net by the manufacturer. Review published May 2012.