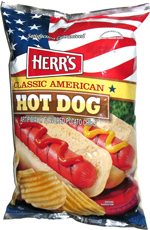 Taste test: When we spotted this bag on the shelf of one of our favorite snack stores, we were of course excited to see yet another hot dog flavored potato chip.

(It's a challenging flavor to do, and flavors like this are one of the reasons we got into this business. We've reviewed hot dog flavors from Don Tacos, Shearer's, 7-Eleven and Humpty Dumpty.) But we were a bit skeptical, as we had just recently reviewed another Herr's hot dog flavor, Stadium Dawg, so initially we wondered if this was just a renaming, of it there was supposed to be a distinction between a "stadium dawg" and perhaps one you would make on your own backyard grill. Then we noticed that the store was actually selling both flavors — at the same time. So we compared the bags and found that the ingredients and Nutrition Facts were identical. Of course, we had to crunch in to confirm that the taste was the same ... and because we just wanted to eat more hot dog chips! It sure seemed like the same flavor. The wide-rippled chips had a nice crunch and were quite tasty, with hints of hot dog meat and various hot dog condiments. But it was disappointing to find that Herr's was marketing the same flavor two different ways, as this didn't seem like a particularly transparent way to deal with the snacking public.