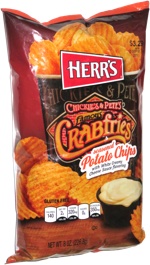 Taste test: These potato chips had wide ripples and a range of light orange colors, with some dark seasoning powder in places. They promised to duplicate the taste of a particular restaurant treat.

We crunched in to find a good crisp crunch and a tangy, spicy flavor that worked well with the potato. It was very roughly similar to Herr's Old Bay chips, but certainly not the same taste, as the Old Bay seasoning seemed milder, and it was enhanced quite a bit by the addition of cheese — it was a really tasty mix of spices. When we shared the bag around, most snackers were big fans, in many cases returning to the bag for chip after chip after chip. A good one!

This snack was discovered by Jeremy at Fresh Grocer on Grays Ferry (where the Pathmark used to be), Philadelphia. Review published August 2017.