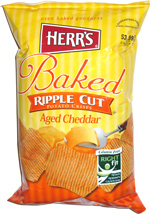 Taste test: These potato crisps came in very odd shapes, with rippled, wiggly surfaces and a color that ranged from a pale beige to a fairly bright orange, depending on the distribution of cheese powder.

We crunched in to find a pretty good crispness and nice crunch, with quite a bit of mild cheddar taste. Our snackers compared the taste various to Cheez Whiz or mac-n-cheese, and people enjoyed the taste quite a bit, in many cases reaching back to the bag for handful after handful. We still think potato chips are better than crisps, but as potato crisps go, these were about as good as we've ever tried!

Smell test: Kind of weird. Chemically, but remotely cheddary too.

From the package: “oven baked goodness” ... “In Herr's® Aged Cheddar Baked Ripple Crisps, the satisfying texture of a classic ripple cut potato chip meets the wholesome goodness of an oven-baked crisp. Top it off with the flavor of premium aged cheddar. And what could be better?”