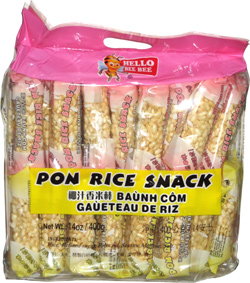 Taste test: This fairly large package contained a whopping 32 separate rice sticks, each individually wrapped. Half of them had yellow accents at both ends of the wrapper, while the others had pink. Inside each wrapper was a whole bunch of puffed rice, stuck together by something sugary and formed into a roughly round-profile stick, a bit over an inch in diameter and about 4 inches long. The puffed rice was a mix of yellow and white, with some darker spots on many of the grain.

We crunched in to find a solid crunch that was brittle enough to easily bite into, with lots of nice, lightly sweet rice taste. Best we could tell, both colors of wrapper had the same thing inside. They were a bit messy to eat, as the crunchy rice can break into pieces and get all over the place you aren't careful, but the taste and texture were quite good.