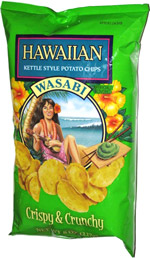 Taste test: These potato chips were thick and crunchy, generally smallish and irregularly shaped, and most surprisingly, they were actually green.

Not bright green or entirely green, but the surface of the chips was a mix of yellow and a dull green, which isn't something that you typically get from wasabi-flavored chips. But far more important than the color was the taste, as there was a good amount of wasabi kick and heat. It was less intense than just eating straight wasabi, but still a sharp, intense taste. They were as crunchy as any wasabi chips we've tried, and our tasters quite loved them, as the wasabi-loving folks kept going back to the bag for more handfuls.

Smell test: Sort of a fried food smell, not particularly like wasabi, but then again wasabi isn't really known for its smell.

From the package: “Discover a new world of flavor when you crunch into Hawaiian Kettle Style Wasabi flavored potato Chips. Our chips are cooked to perfection and topped with the finest ingredients. We combined the zest of wasabi root with a kick of horseradish and thick sliced potato chips to create this ultimate island delight.”