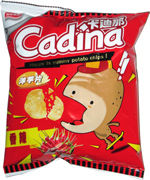 Taste test: These potato chips had a fun name and came in a very entertaining bag. It featured a potato wearing a hat, riding a skateboard, falling over and eating potato chips — that's comic genius! Best of all, they were very tasty chips. The chips had wiggly shapes and a light orange glow, as there was a sparse but even spattering of dark reddish powder.

We crunched in to find some very mild spices, at least at first — a mix of cheese, onion, garlic and some hot peppers, but mild enough to easily taste the potato as well. Those spices grew in intensity shortly thereafter, and they stayed around for a nice afterburn too, not quite enough to make me run for water, but a nice mild fire in the mouth. Quite a nice flavor. We got many thumbs-ups from the snackers with whom we shared these.