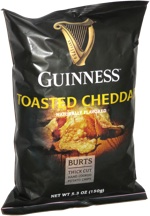 Taste test: Following up on the original and Chili flavors of Guinness potato chips from Burts, this one promised to combine cheddar with the flavor of a Guinness stout. The chips had wiggly shapes and various shades of yellow to brown, much like the other flavors.

We crunched in to find a nice crunch and a tasty, mild cheddar flavor to go along with a rich potato flavor. As with the other flavors, we didn't taste much in the way of any Guinness beverage, but we liked the chips and enjoyed them with some cheap beers.

Smell test: Good potato smell, with a hint of cheese.

From the package: “Get ready for round 3. The partnership continues and this time it's getting cheesy! Using a combination of thick cut potatoes, the classic cheese toastie has been combined with the world's most iconic stout flavor, to create a mature double act.”