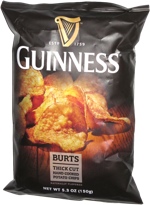 Taste test: These potato chips had an unusual appearance, with a mix of yellow and brown on their fairly flat surfaces. The big appeal here was the huge word "Guinness" on the bag, so we were eager to share them with some snackers who enjoy a good pint of Guinness (though they were drinking various beers at the time).

When people crunched in to a chip or several, they noticed the excellent crispness and good crunch, and all had high praise for the taste, but nobody detected any flavor resembling beer. Descriptions of the taste varied, but some compared it to a beef ramen type of flavor, while others found it to be like buttermilk or cheese. Very tasty!

Smell test: Not like Guinness. Not like beer. Kind of a sweet mix of spices and potato.

From the package: “This is a love story like no other. The meeting of the world's most famous stout and the world's finest artisan crisp, and one mission to take taste buds to new extremes. Combining their expertise and craftsmanship, Guinness and Burts Chips set out to create the ultimate snack in a pack. Hand cooking quality potatoes to crisp perfection, before evenly seasoning with a rich blend of Guinness® flavors. The result is a mouth-watering crisp with the bitter sweet flavor of this iconic Irish stout”